Write Way Communications offers a variety of writing services most suited to your needs. We help you get heard, while producing outstanding written products that reflect your professional image, which is so critical in today’s competitive marketplace.
I am impressed at the difference in the clarity and readability after your changes are implemented. Thanks!
- Kathi Soniat

Not every restaurant is made from metal and has a roof and walls in the shape of a semi circle; called a Quonset hut, this restaurant is also in the middle of nowhere. Ted’s Range Road Diner is most certainly worth a visit. 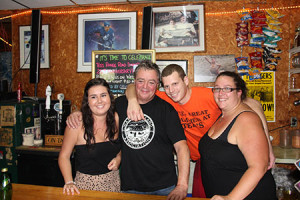 About thirty years ago, Ted Lye, had a dream of opening his own restaurant. With determination and a limited budget, he managed to scrape together a down payment for the old hut and set out on an expedition to build what is now an amazing restaurant and a destination in itself.  When Ted first opened, he was quick to serve his food in heaping, hearty helpings and so the people came and continue to do so.   Not to forget to mention, the menu of wild and exotic foods draws in many curious, hungry customers.  Ironically, the location of the hut became as much of a drawing card as the ‘wild’ menu.

“People come here because they feel they’ve made a journey to somewhere totally different.  We cater to a variety of customers, bikers and hikers coming in off the trails, locals and snowmobilers coming in off the side trail from the main trail between Collingwood and Owen Sound and we are now even a hot spot for tourists travelling from Blue Mountain Resort,” boasts Ted, proudly.

Ted Lye is a self-trained cook who broke all the rules on the location of opening a popular dining spot when he purchased the restaurant from a man by the name of Archie.  The Quonset hut was originally purchased in 1977 and converted into a restaurant by Archie who served in the army. Archie offered a very basic menu to the army guys until Ted bought the business.  Ted trained under a chef over 30 years ago and was determined to open his own restaurant and that he did.  “I was always interested in cooking and have worked in a few places in and around the area as a cook before I decided to permanently stay and open up the diner,” says Ted.

If you know Ted, then you’ll understand his humour and positive outlook.  It’s apparent throughout the restaurant with his happy, inviting and friendly staff; a comfortable atmosphere with an elegant yet ‘wild’ menu.  His entrées are garnished with a slice of watermelon and fresh dill, clover buds to compliment the salads, and all of Ted’s sauces are made from scratch.  He describes his restaurant as “casually comfortable and a little on the wild side.”

Drop into Ted’s and spend time with locals, weekenders, farmers, jammers and even snowmobilers driving in off the trails. The Wednesday night jam session is a great time to let loose and enjoy live music at the same time. You won’t be disappointed and you may leave with a few good stories for your friends and family about the atmosphere and desolate location.  The decor inside the restaurant is almost ‘trucker’ like with chipboard covered walls, a collection of Simpson’s dolls alongside the stage set up for jam nights, a concrete floor and a tabletop Pac-Man video game from my era during the early eighties.

Ironically, the location of the hut became as much of a drawing card as the menu. According to Ted, “people are coming here because they feel they’ve made a journey to somewhere totally different.” Main courses start at about $20, but portions are huge. Challenge your taste buds by ordering off the blackboard daily specials and try bison, venison, musk ox, quail, fresh Georgian Bay whitefish and even alligator, kangaroo and emu at times. Not so adventurous? Ted’s Range Road Diner also offers regular Canadian food items such as homemade burgers and fresh cut fries.  Everything is homemade at Ted’s; the servings are huge and the food is just absolutely amazing.  That’s the best way I can describe it.

Ted is also a firm supporter of the local food movement and he serves up a variety of seasonal and organic veggies to accompany his tasty, original dishes.  “I have gluten free, vegan, vegetarian and just about any dish our customer’s desire.  We cater to the needs of our customers and that is why they keep coming back for more,” says Ted.

To find your way to one of the coolest little restaurants in the area, take Highway 26 three kilometers west of Meaford and turn right onto County Road 112. After roughly a five-minute drive uphill, you can’t miss the large Quonset hut on the left. It will be an experience like no other that will enlighten your soul and make you feel at home. I highly recommend a visit to this remote country haven.